Throughout time, great physicists and soldiers put their heads together to create.  In Wuppertal-Elberfeld Germany in 1938, in Los Alamos in 1945. They combined their superior intellect for its seemingly highest purpose— to create a stronger pesticide, to split the atom—all to improve our lives. Instead they gave us the threads to sew our own destruction. And so, a terrible beauty was born. And is born, and born again with each generation.  Visions of their genius are beamed across the globe in HD video. Of bombed out fields made infertile by such men’s folly. Of shop-keepers shop-less, of mothers now without portfolio. Masons search for stone to hone amongst the rubble. To rebuild?

They find only flint. With nothing to build or cook, they question, “Why bother with fire?”  And within this desolate Hell-scape a terrible, still beauty is born— one that will insure its procreation because for every action, there is a reaction.  Evil must one-up itself from war to war.  The mother of all bombs (MOAB) will procreate. It’s human nature – the part that saner minds try to contain.

And then, the bravest of all steps forward.  The small voice of hope who dares to take the flint and start a fire around which survivors gather to find comradery and tools.  And maybe even the strength to start anew. 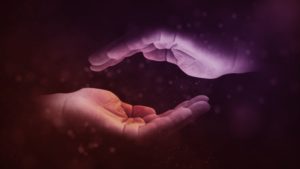 A terrible beauty is born of the caring that comes with a diagnosis.  The flowers, the concern, the love of others made palpable by the devastation wrought by a disease’s name.  It is an evolving, sometimes terrible beauty that exists now.  For amidst the cards and love there is the ever-changing new normal and its requisite, constant tweaking.

Only it’s not.  There’s another notch in Parkinson’s degenerative belt.  More Dopamine-producing cells lost. A tremor whose rhythm changes depending on factors I used to ignore. Tired, nervous or attacked by cooties, and my left arm shakes to a faster beat.  Rested and relaxed after a workout, and my tremor follows a different, slower drummer. There is the love that wants to help by doing when there is nothing that can be done. There is the love that helps by its mere existence. By just showing up and creating warmth, and comfort – like a camp fire.

Similar twitch, different day.  MOAB exists. Parkinson’s Disease progresses. Another, more destructive weapon will be developed – in the name of peace, naturally.  I’ll lose more brain cells.  I don’t have a crystal ball, so I don’t know the path of any of the terrible beauties that fill our world, my world. I only know that there is beauty everywhere in a bomb, in a tremor – and most hopefully of all, in humans’ hearts.

One thought on “A Terrible Beauty”