“Do you have delusions?” asked my husband while we were watching TV, reacting to the commercial that just aired.

“No!” I said emphatically.

Delusions of grandeur? Perhaps. But the people who are in my room are there in the flesh.  And they’re usually asking for something.  True, I do hallucinate occasionally that my children aren’t asking for money when they’re being nice to me. But none of this is disease related. I’m okay.

Delusions and hallucinations are a possible symptom of advanced Parkinson’s Disease.  Even the commercial notes that this occurs in only about half of patients.

The glass is clearly half empty – for some.

The commercial is produced by Acadia Pharmaceutical to support one of their drug, Pimavanserin, which shows promise in helping the estimated 40% of twitchers who experience Parkinson’s Disease psychosis. 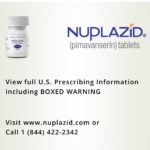 My glass is half full.  I’m going to be in the 60% who merely twitch and occasionally tumble. And if late in my Disease — PD is a marathon, not a sprint, most people die with it, not from it — I develop this debilitating psychosis, I’ll be grateful for Pimavanserin and for the drugs I hope it will inspire.

In the meantime, I’ll keep the remote-control close. I do shudder every time I see that damned commercial. I’ll feed my ego by telling myself that everyone wants to hear that I’m still in my right mind. Well relatively; I’m just as crazy as I’ve always been. The only delusion from which I suffer is that you look forward to my posts. And that this particular one elicits a sigh of relief.

*there are many clinicians who take issue with this statistic by the way. And remember, There are “lies, damned lies, and statistics” asBritish Prime Minister Benjamin Disraeli noted.