I am losing my mind. Am I’m losing it to my Parkinson’s Disease?  To age? To maladies yet to be diagnosed?

I stare into space, trying desperately to remember what was right there, right there, on the tip of my tongue just moments ago. Then it hits me:

It’s not the Parkinson’s Disease.  Nor age, nor my blessedly over-committed life. No, it’s those plotting little hellions, the Teen and Tween, who separately and together are intent on exacting my mother’s revenge.

It’s my hell spawn who are driving me bonkers. Their ability to jump up and down on my very last nerve is masterful. If only they would channel this genius to their studies, they’d be the Nobel Prize-winning-equestrian-supermodels I dreamed I’d birth while pregnant.

It’s not me. It’s them. Those little agent provocateurs and their absolute conviction that sleeping with iPhones, playing Fortnite – yes, I know about the kid with the unpronounceable name who is now a multi-millionaire, thank you very much – and binge-watching “Friends” while cramming for tests the night before are the ultimate keys to success.

“Stop with the video,” I command as I turn on my son’s bedroom light. Like a light-allergic animal he retreats under the covers. Does he actually think I won’t notice his iPad’s glow?

“Too much screen time isn’t good for your brain. Especially before school. Come on, we have to get going!”

My Tween grunts in reply. I’d like to claim it was a respectful grunt, but I don’t like to lie.

Next, it’s onto my daughter’s room where I will silence her snoozing alarm while I struggle to shame, guilt, cajole – she is not morning person – her into consciousness. On my second trip in I find that her head is buried not in her pillows, but in her phone.

“Get off the phone and into your clothes,” I instruct. She snorts a ‘respectful’ reply.

Removing electronics from children’s rooms at night is supposed to be a twofer; gets them to sleep and gets them out of bed in the morning. And it does.  Keeping them out of bed and on schedule, well, now there’s the struggle.

“Mom, would you just chill out,” my Teen opines as I pull out of our garage, “I can make decisions about my life. I’m almost 16!”

“You’re not a fully-formed adult,” I reply. “There are studies….”

“By old people,” sighs the Teen, rolling her eyes with the dexterity of a gymnast. “For old people.”

“That ruin our lives!” adds the Tween.

At least driving me nuts unites the plotting little rabble-rousers.

I pull onto Sunset, determined to make it to the Teen’s school bus, early drop-off for the Tween, and Starbucks before my meeting.

I urge each child to make good choices that day and drive off toward to fulfill another role; another working woman, I walk into a 9am meeting right on time and am actually able to weave together words into sentences that express cogent thoughts. I am a competent, capable and multi-tasking adult who has this ‘life thing’ by the horns.  This self-image for almost two whole hours – until I pick-up both kids from school.

“Mom, did you forget you promised me that I could have friends over tonight?”

And with that single sentence, my teen daughter erases my sense of competence and sanity.  Bitch.

“I never promised,” I reply. “I said, ‘we’ll see’.” The universal Parent-Get-Out-of-Jail-Free card.

“No, mom, you did promise,” chimes in the Tween in support of his sister.

I turn around to see my dynamic duo high-five each other. As they unite in my daughter’s Machiavellian machinations, my heart fills with a love so intense that I am calm: they will stand by each other, they will be okay.

That night I order pizza, four girls apply make-up to each other and a surprisingly cooperative 11-year-old. It is a perfect Friday night. Not once during the evening do, I worry if it’s them or me because we are just us.

“I like your friends,” I tell my Teen as we clean up – one of us by choice – some of the girl bonding detritus.

“Mom, we were talking about your twitch and CBD and it turns out they make pot stuff specifically for Parkinson’s Disease.”

“Yeah, and it doesn’t make you high,” her Fierceness insists, kissing me good night.

I sniff her. “Smoking pot before your brain is fully developed can have lifelong consequences.”

“Jesus Christ, mother, we were just talking about it!” She grunts, turns on her heels and stomps off to bed.

I know some of you wonder. I wonder too. What does my neurodegenerative future hold? I don’t know. I wish I did.

But for now, for this moment and for the foreseeable future we don’t have to wonder because we know the true source of my insanity. It’s not my Parkinson’s driving me nuts. Nope, it is these plotting little buggers, the ones I love so very much, the ones who drive me absolutely batshit crazy.

Naturally, no one in the history of the world has claimed that PD improves your life; neurodegeneration is something to be fought against and my progression is slow – thus far at least. Since klutz is my middle name, the disease’s effect on my movements isn’t obvious.  Not even to me. Sure, shaking is inconvenient. It slows my typing and makes all martinis shaken, not stirred. And sometimes spilled.

But it does burn calories. And it masks the rageful, raising-fists-on-high-frustration of parenting these two little strong-willed souls.

There are opportunities masquerading as hurdles along life’s journey. My pesky progeny make me a louder and sometimes even a better person. My twitch makes me a more sympathetic soul. Still, I wouldn’t mind a cure for both Parkinson’s and adolescent individuation.

I’m going to look into CBD oil for both afflictions while it’s on my mind – and before those damned kids come home and remind me that I wouldn’t have it any other way. 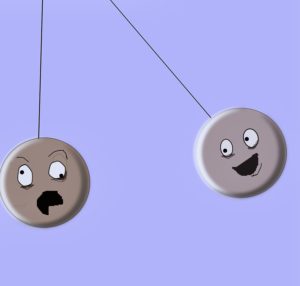