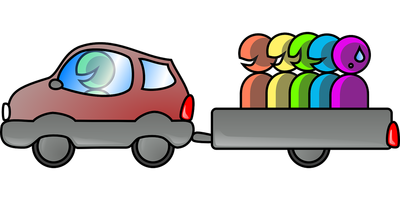 My daughter’s two friends were struggling to get into the back seat of my Chevy Malibu, so I got out of the car to help my daughter move her seat forward.

“Okay, maybe not,” she said, as all three girls started laughing.

After we did move the seat forward I caught a good-looking father and his daughter looking at me as they got into their nearby Porsche.

“It’s a loaner,” I said sheepishly.

He smiled and nodded in a way that said, “During the millisecond I acknowledge your existence, it is with pity.”

I was at the losing end of an LA stereotype; we are our cars and mine was inferior to his.  I’d like to say that status and the symbols we use to convey it to our families and the world don’t matter.  I’d be lying.

“When do you get your real car back,” a voice from the backseat asked, giving voice to my feeling that the only thing to recommend the Malibu is that my SUV – whose radiator is being serviced – looks better by comparison.

As we headed west, the illogical sound system confounded my daughter (as it had me) who kept trying to get me to focus on the music selection as she searched for her favorite stations.

“But we need music.”

“Forgive me if I prioritize driving safely,” I said.  The girls in the backseat giggled.

My daughter’s frustration and the radio’s volume grew louder.

“I’m going to hit you really hard if you keep this up,” I ‘threatened’.  One of my passengers commented, “I’ve never heard that before,” before all three girls broke up laughing.

Clearly my husband and I had tabled corporal punishment far too early in our parenting life.  Both of us were spanked as children and remember it making us angrier rather than more compliant, which is why we’d eschewed this tool.  I made a mental note to reconsider this decision – but in the mean time, decided to ‘Dance-Drive’, now that suitable music was playing, to keep the mood light

“OMG, if my mom did that I would be so mortified,” said the one girl left in the backseat … [I did mention that the sound system was illogical, right? Well, that’s why it took my daughter until after we’d already dropped off one of her friends to get to her music choice.] Yes, yes, I imagine it would… which is the point, I thought to myself. . A mother willingly making a fool of herself always embarrasses a tween and a red-faced kid is usually easier to keep in line.

Instead, with the giddiness of a 2nd place showing in their volleyball tournament, my daughter car-danced along with me while her friend ‘sang’.  It was a good drive; I was whimsical but in full control of the car – literally and metaphorically. I thought my status secure enough that with the other mother’s agreement, okayed a sleepover for the girls at my house.

I said I would allow them to watch one episode of Modern Family but ‘accidentally’ allowed them to watch a second episode after they welcomed my son on the couch – a little limit testing as long as it’s inclusive is fine by me.  I allow these little pushes in the hope of avoiding a complete adolescent rebellion, employing the same rationale California uses when it sets Controlled Burns to mitigate forest fires.  Mistakes are sometimes made – hopefully only with the fires. *

But, at 9:45pm the light in my daughter’s room was still on.  I had to end the insurrection. “Girls, go to bed.  Don’t make me sorry that I agreed to this sleepover,” I said sternly.

My daughter is not my friend nor do I want her to be. She is my charge and my job is to guide her so that she uses her talents and privilege for good not evil.  Hopefully, she will see me as more than a rule-making wallet. I work to make my parental decisions logically so that she respects me and makes what I consider good decisions out of love rather than fear. I believe that this is only possible if I maintain my status as a benevolent overlord even if that means she continues to grunt when I ask her how her day was.

Everyone was in their places by 10:00pm; the kids’ rooms were quiet and dark as my husband and I chatted about our respective days.

*For the record, I don’t want mistakes to be made controlling forest fires and said this for comedic effect.  I hope to get comments, not hate mail or psychiatric referrals.